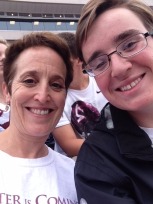 In mid-September, Steve and I had planned to go visit Mark and attend a VT football game. But Steve’s back molar suddenly exploded in pain and he had to stay home, post-root-canal-that-followed.  So I drove down by myself. I thought about just staying home with Steve and not making the long drive, but I wanted to see Mark.  Plus, in typical Mark-fashion, he’d left his hanging bag containing his business-wear at home, and he had the Expo – where engineers are offered jobs! and internships! – coming up shortly.

I got to VT and picked up my handsome guy at noon – and off we went to a great brunch place called “Our Daily Bread.”  He was so amused at my excitement over my enormous slice of asparagus quiche, beet salad and avocado salad (he constantly teased me about my love for beets and avocados).  He had a huge Greek omelet.

We talked about everything and nothing – classes, roommates, situations, the future.  He knew he had to get ready for the Expo the following week.  He was determined to not return to his summer job of the past two years, working at a local country club as a short order cook; he was ready for an internship, or maybe even to try out a co-op arrangement. We, Steve & I, thought the latter would be a perfect fit for Mark, a way to see engineering literally at work around him.

After brunch and quick trip through a college-gear store next door, we went back to his apartment.  I laid on his bed and edited his resume while he did something on the computer.  We ended up driving the mile to the football game – in spite of the $20 parking fee – because my knee was bugging me.

At the game we took that selfie ^^^ to send to Steve.  I’d borrowed the white T-shirt from Mark — I didn’t know it was a “white out” game. VT takes its football and its fandom SO seriously.

After the game, as we were walking back to the car, we were chatting about school budgets for some reason, and he (my gamer!) was complaining about too much technology in the classroom – that he thought pencils and paper were fine, that the idea of giving every kid a laptop or Ipad was not a good one. We talked about the challenge of retaining kids’ attention in this age, about the usefulness and the intrusion of technology. He volunteered how much he had enjoyed his rides in the jog stroller with me as a very young child, when Sarah was in school and he wasn’t…how we would laugh and make up games, and how it bothered him to see moms now, walking around with their faces stuck to their phones, ignoring their kids.  We both admitted that might be unfair – those moms might have been perfectly attentive other than in that moment – but recognized the joy of those days long ago, when the days were often long but smacked of simple sweetness.

As we got to the car, his phone rang.  Roommates were locked out – could he come let them in?  We realized we couldn’t do that and fit in a quick dinner, so we went back to his place and hugged good-bye, said our “love you’s.” I realized, as I drove away, that he was not at all upset to see me go. He had a life at VT he loved a lot and he was eager to jump back into it.

That was my last hug. 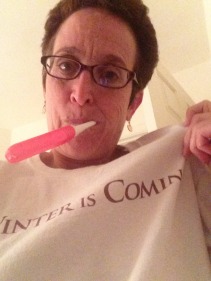 Later that evening, as I got ready for bed, I realized I’d forgotten to give his shirt back. I texted him this photo, with the caption “oops!” He LOL’d and said “No worries.” He had a lot of VT shirts, after all, and he could get this one back at Thanksgiving, when he was home on break.

One thought on “November 15: Remembering the Last Time”