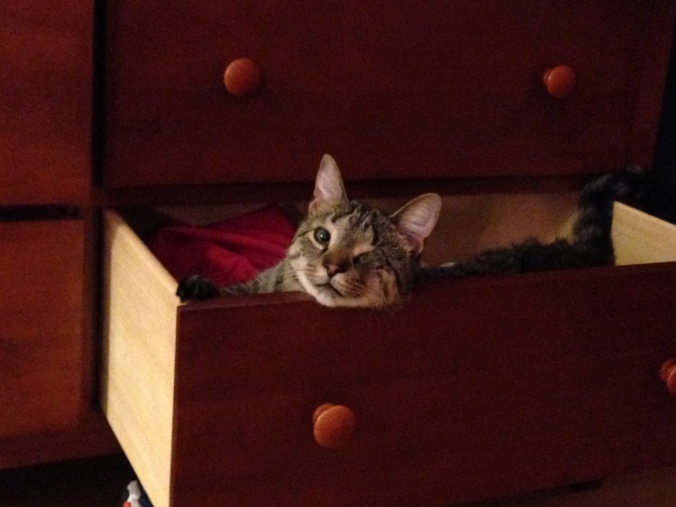 He really is the cutest bio-terrorist you ever met.

One of the the things grievers struggle with is when to reveal the truth – the whole my-life-is-completely-changed-because-of-this-terrible-loss truth (much less “oh, but I think my kid still communicates!”) – about ourselves. Who can handle it? Who cannot?  And is there a broader lesson here, for us all, about the importance of being real? Sometimes, I have found, the truth just sort of takes over…and further: that it’s more than okay. Being truthful can deliver you to a place of Presence.

There is a rather unlikely story to share: I’ll try to be brief (hahaha!).

In late September/early October, we hired a man (John) to replace all of the screens on our back porch and to build our very spoiled, special cat (Jack, the “bio-terrorist” who pees on things when his little world gets rocked) a new outdoor cage – essentially, his own screen porch off our screen porch. I KNOW THIS IS RIDICULOUS.

When John had come to look over the porch, I’d noted that Jack-the-Cat – who had been hanging out on the porch – was TERRIFIED of this man; so much so that he (Jack) pooped a little, and then proceeded to literally fling himself against the door into the house hoping to escape. Had I actually gotten any return phone calls from other contractors (!!), I might have hired a different one who did not create that kind of reaction; however, since John was the only responsive one, I hired him and decided Jack would go to the kennel while John was at our house. Just in case, you know, John was a qualified carpenter while also being a Certified Cat-Killer.

A series of Unfortunate Events, mostly on John’s end (his kid got the flu, then he did; then the materials for redoing the screens got back-ordered; then the weather was uncooperative) delayed the start of our project until the day before Thanksgiving. I was frustrated and he seemed to be; however, we have a history of dealing with contractors who turn out to be (a) alcoholics, and/or (b) unreliable, so I was highly suspicious, wondering if all those were not explanations but flimsy and untrue excuses.

When John arrived, I had not yet taken the cat to the kennel; Jack immediately went under our bed. Two hours later, I noticed Jack was missing. Sarah was home and a full-out search began. We looked EVERYWHERE. I remembered that Steve had been in and out several times before he went to work; might Jack have escaped? He’d never come home as long as John was present! We continued to turn the house upside down. As seconds turned to minutes, my anxiety took an ax to any and all claims to rationality.

Then I noticed John was gone – he’d talked about going to Home Depot to buy some supplies – and I thought, “This is it. I should have listened to my gut. He’s taken Jack!” In my hysteria, I felt like Jack’s 9 Lives had just narrowed down to 1 Very Short One, so I sent John this text:

Hey! Have you seen the cat? We can’t find him and I am worried he got out. I know you probably think he’s just the most spoiled cat on the planet…

I added, just in case John was reading his text messages while preparing to strangle my beloved pet:

You see, my son died 3 years ago and that cat has been sort of a lifesaver. So maybe that will help you understand why he is so spoiled.

When he didn’t reply immediately, I continued:

I found the cat about 10 minutes later, shut in a closet we rarely open. I hadn’t had a chance to text John back before he replied. “Oh no! I did not see the cat. Is there anything I’ve done or did to make you feel uncomfortable? Let’s talk when I return. I hope you find him.”

I decided that calling out my anxiety as a Big Fat Liar meant I could say this truthfully in reply:

Oh no, you didn’t do anything wrong. We found the cat. Sorry to freak out.

When he returned, he did not say anything about the truth I’d blurted; he asked again if he had made me uncomfortable (“Oh, um, no!” I replied) and went to work. I was rather embarrassed.

John was supposed to return the Tuesday after Thanksgiving and complete the job. Instead, on Tuesday morning, I got a phone call – his wife was calling on John’s cell to tell me he was in the ER. “They think he has a kidney stone. He says he will call you tonight.” Which he did, saying it had been a tough day but he was expecting to return early the next morning. I must admit that even then, I was not at all convinced of his veracity. The weather was quite cold and drizzly, unpleasant for outdoor work – was this an elaborate means of delay? I had told his wife I would say a little prayer for him, which I did, but I admit it was grudging and very small indeed.

John showed up late, at 1pm the next day, 30 minutes before I had to leave for a doctor’s appointment that was weighing heavily on my mind, and I wanted to go over a few things with him before leaving. But as soon as he saw me, he asked me to come to his truck, where he proceeded to show me (1) his doctor’s note, proving that he had indeed had a kidney stone, and (2) the receipt from the builder supplier he’d had to drive to that morning, in a more distant city, because his usual supplier had ordered the wrong materials. I felt terrible, more convicted of my poor judgment as we walked together to the rear of the house. This guy is super honest! As I processed that and prepared to launch into my list of things to tell him, he suddenly turned around.

“Can I tell you something? I just feel like I can share this with you for some reason. Do you believe in God? You’re a believer, right?” I nod, thinking “Yes, I guess I am, even when I wrestle and scream.” “Because yesterday . . . yesterday, Emily, I thought I was going to die. Have you ever had a kidney stone?” (I haven’t. I did tell him I’d birthed two ginormous babies so maybe that was comparable?) He went on. “The pain was indescribable. I was throwing up and losing consciousness over and over. I said goodbye to my wife, my kids, I made my peace with God.  I really thought I was going to die. It was an incredibly profound experience!”

I was really moved. My emotions were already high, my nerves twanging, and this sharing pushed me further. After confirming the noteworthiness of his experience, I said, “John, I’m blown away…it’s really so amazing that you told me this now, because I’m headed to the doctor in a few minutes – this is why I have to tell you some things and rush off – to find out if I have cancer.”

We stared at each other, recognizing the not-a-coincidence nature of the moment in which we were suspended. About 5 seconds later, my Qualified-Carpenter-and-Absolved-Cat-Killer was sitting on the low brick wall of my porch, holding my hands, and praying for me, for us, for Mark; I was sobbing by the end.

(Finally: the conclusion of the story…)

I don’t have cancer. Thank God. I still don’t know what to do with the rest of my life, but I’ve presumably got more time to try and figure that out.

John passed his kidney stone without further pain (being New Best Friends, I’d felt free to tell him I’d read somewhere that drinking lemon juice and/or apple cider vinegar might help break up the stone. So who knows! Add “Naturopath” to my resume!).

And I felt, in addition to the incalculable value of being real with one another, the gentle schooling of God once again. As I said to my sister when I told her this story: once again, I could not be MORE happy to be wrong.