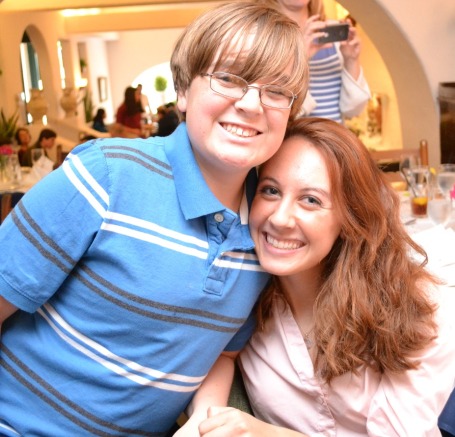 Last night….I dreamed I was rubbing his back. This was my first real dream about Mark since the day he died. And this was something he loved – he loved to have his back scratched.

Just this past August, while he was still home for the summer, he would throw himself (THUD…145 lbs of man-boy) face-down on our bed, between his dad and me as we settled in for some reading, for a back rub. I could kick myself for the times I didn’t rub very long, or was so busy reading (whatever I thought was more important in that moment) that I barely paid attention.

​In my dream, he was smaller – more like 12 or so – and the room was very dim. He was sitting on my side of the bed, and as I rubbed and scratched his back, his shirt – the striped blue polo he wore a lot in middle school – would ride up and I would tug it back down periodically (you know – right?  How you have to ruck the shirt back down? We’ve all experienced that).  I could only see the tiniest bit of his face – just his right ear and the curve of his cheek. But he never turned completely around.

When I woke up, I felt some relief, but I will admit: I was also vaguely dissatisfied and bothered, and the feeling became more pronounced as the day wore on.  What was that about?  Why couldn’t I see his face? Was the back rub for him to feel better, or for me? Why can’t I just be content that I got to touch him? I could FEEL his back, he felt wonderfully solid and real.

Later that evening, we went to dinner with long-time friends and as we chatted and ate our appetizer, I was feeling almost normal for several minutes at a time (I will admit: the beer helped).  Then my phone buzzed with a text from Beth.

Oh Bev, you will be so missed.