I was discouraged from doing so. The head nurse said as a mom herself, she would not want to see her child like that.  Our good friend Bryan, a pastor recently assigned to a church near the trauma center, who came rushing to the hospital to be with us, gently and soberly advised waiting until later (after the funeral home had tidied him up a bit) or not seeing him at all. I listened, I understood, but I knew I had to see my son, my Marky Spark.

God love nurses. They wept with me and then held a holy silence as I ran my hands through his hair (wake up), stroked his wonderful dark eyebrows (wake up, Mark) and admired the curve of his nose. He was late to bloom, my son, and at 19 was just starting to successfully grow facial hair – we teased him incessantly about his mustache and the unibrow. He was more than “banged up” – there was a lot of blood all over his face, but the practical side of my brain knew even minor head wounds bleed profusely. All of his significant injuries were internal.

I touched whatever I could that wasn’t covered – his face, his head, his arms, his hands. I kissed his hair.  I noticed, vaguely, that his right hand was slightly curled, as though cradling one side of his PS3 game controller, thumb at the ready. (Oh please let this be a prank, a joke…I could take it!). I told him I loved him. His armpits were still warm. 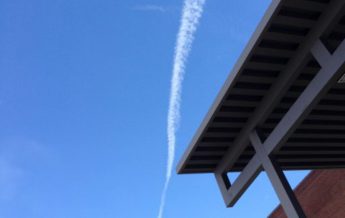 We wearily made our way out an hour later, after meeting with the police, who told us an investigation was underway. The sky was a beautiful, intense blue with very few clouds. Earlier, before finding out her beloved nephew had died, my sister had texted: she’d felt a nudge from God to tell us to “go sit in a sunny window.” No sunny windows in the bowels  of a hospital; instead, Sarah and I had stumbled out of the gloom, gone outside and looked up. There was a contrail there – stark against the vivid, deep blue sky.  Fat, powerful, like it had come from something larger than an airplane, with a swirl at one end…and the other end disappeared into the face of the sun. Our boy, our man-in-the-making, was an aerospace engineering student. My daughter and I sighed. “There he goes.” 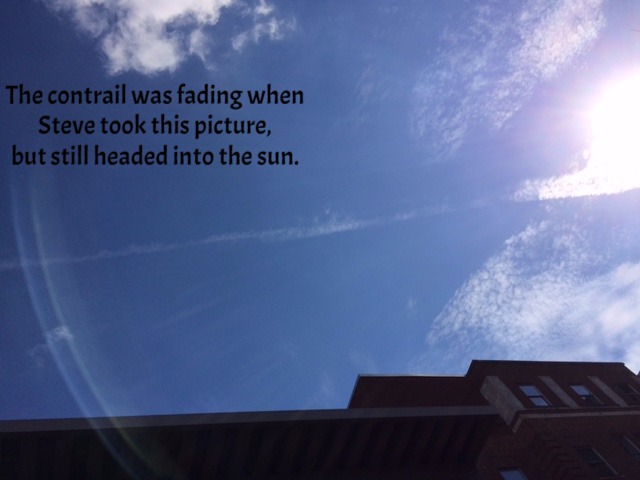 My husband’s stepmom, Mary, lives near the trauma center. We had to bring our sorrow to her doorstep and we hated doing that to her; she recently lost her second husband to cancer, and grief’s stamp was still visible on her face.

As we sat, numb, at her kitchen counter, we entered more uncharted territory: what in the world comes next in this nightmare? What to do with our son’s body? How to transport it home? Where will we put him?  When and how does one go about planning and executing a funeral for someone who isn’t supposed to be dead?

In the midst of all that, a single thought-image entered my brain: his service had to be at his high school gym, and his high school choir had to sing, and we had to show videos and slide shows and tell stories. He loved making videos, parodies full of silliness, with his friends.  He loved to sing. And we had to have a seat for everyone who needed to be there.

I texted my friend, Kathy R, who still has a kid at the HS and works for the school system (this woman is connected). She texted back: “I’m sitting next to the principal at a band concert. He’s gone to check the calendar.” Moments later: “the entire school is yours.”

In the days ahead, my insistence on using the gym would be repeatedly questioned – a gym isn’t ideal! there’s no sound system! the lighting is bad! But it had to be there.

Everything in me said YES. I had to be there with those who knew him best and most recently.  But “logic” (it was a long drive, the vigil might be over, we were all bone tired) won…and my husband just could not do it… and we began the long night.

I tried so hard to fall asleep only because I thought I’d see Mark there, in that space between waking and dreaming. All I got was what I felt was the product of my shocked brain imploding, brief glimpses of what I hoped was true: Mark looking at the universe in awe…Mark skating, a distant figure, across narrow bands of cosmic particles which exploded behind him in glistening, undulating clouds in the airless space.

The next morning it was clear to us all that we needed to go there…to be with his friends, his roommates, in the place he’d called home for over a year. But first we had to go to the funeral home.